Why Cthulhu Isn't On That Gravestone: A Sympathetic Response to io9 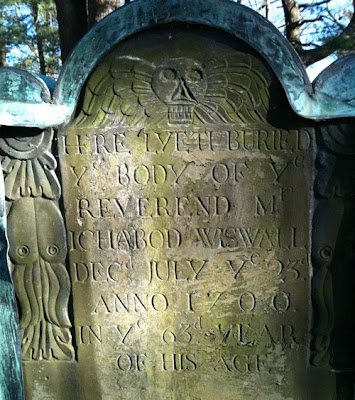 Here at Miskatonic Museum, we curate and display objects and cases where the real world parallels or at least calls to mind the works of H. P. Lovecraft and his Cthulhu Mythos. So we were amused when io9's Jess Nevins recently pointed out a tombstone from Duxbury, Massachusetts that to his eye resembled one of the common icons for Cthulhu. This is very much up our alley, and is comparable with our most famous piece, the Moche Headdress, possibly from La Mina, Peru, which may provide additional insight into the Cthulhu Cult.

But as with our Red Rain of Kerala exhibit, examined through the lens of "The Colour Out of Space," we do try to also educate our visitors regarding more mainstream interpretations of these objects. In the case of the Duxbury Stone, there seemed to be more that might be said in this regard.

One of the comments on the io9 article, by greenivygrey, notes that the border is a gourd and floral design, and points to similar iconography on a 1695 tombstone. Another example, from 1697 was photographed by jlbriggs in Newport, Rhode Island. This design is also known as "fig and pumpkin" and in these examples this is more obvious than on the Duxbury Stone (which includes the figs, but not the pumpkin). Another example from 1705 Ipswich can be seen here. PrimaryResearch has a visual glossary of colonial-era headstone elements which you can view. If you are a student of these designs, please feel free to add further information or corrections in the comments.

You may notice that all of these examples cluster together. This brings us to the Death's Head design on the Duxbury Stone, and the work of archaeologist James Deetz. James Deetz was a pioneering historical archaeologist, author of, amongst other works the book In Small Things Forgotten: An Archaeology of Early American Life

. Deetz's most famous work may be his seriation, conducted with Edwin S. Dethlefsen, of New England headstone iconography. You can read the article here. This seriation did not directly address border designs such as the fig and pumpkin, but is a classic case study on seriation of material culture. The article tracks the waxing and waning in popularity of three basic headstone designs, and then goes into detail into the specifics of the evolution of these designs, and how demographics, settlement pattern, religious beliefs, and economics affected this evolution. This article has led to other projects, including those utilizing the study to educate children in history and how to conduct research, such as Dean Eastman's "Tiptoeing Through the Tombstones" which has another illustration of the fig and pumpkin motif. 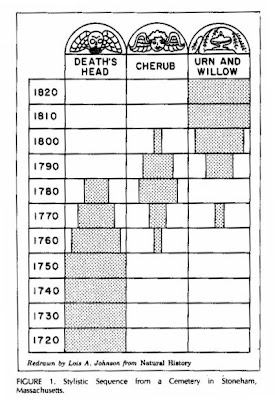 Seriation is a technique developed over a century ago that is in many ways the backbone of everyday archaeological chronology (anchored in time with absolute dating techniques such as radiocarbon). The style of material objects generally changes through time, and in most cases, it changes in a relatively predictable and common sense way. Elements of style or whole styles are innovated or introduced, they become popular and widespread, and then they drop off as another new fad or trend emerges. The sequence of these changes can be compiled and used to date when an object was probably made. We do this all the time, recognizing that a car or a pair of pants or a building is from a particular decade or century based on other examples we know from that time. We know that Mad Men takes place in the early 1960s not from seeing a calendar, but from the clothes, and we recognize the show's advance through time as the clothes change. And when we see something we believe to be out of place, even if it is not, we find it jarring, as in the recent meme of finding "time travelers" in old photos or video clips.

Deetz and Dethlefsen seriated these grave markers not just to study them in particular, but as a larger test of seriation. The article was published in 1967, an era when explicit testing of the rigor of archaeological methods had reached a fever pitch in what historians of archaeological theory call "The New Archaeology" or processual archaeology, contrasting it with "culture historical" archaeology that had preceded it. The headstones are dated, and some of the carvers are known from the historical record. It was an ideal case to determine whether seriation, regularly applied to prehistoric artifact populations, actually worked like everyone thought it did. Below is a video of archaeologist Dave Wheelock carving an 18th century style headstone for the late Deetz.

This headstone may feature pumpkins and figs rather than Cthulhu, but I suspect HPL would have appreciated what has been learned about these tombstones in the intervening decades. He wrote extensively about changes of style and elements of architecture, both in his letters and in some travelogues, unpublished during his lifetime with an antiquarian bent (most famously his purposely archaic "Quebeck" study). He wrote about small bits of old Dutch material culture in New England, liked the idea of a museum of folkways, and went on in an amateur fashion about regional English-language dialects in America.

Just as a side note on the io9 article, while Innsmouth does indeed have some elements of Ipswich and Gloucester in it as Mr. Nevins notes, much of it was openly based on Newburyport. Like Arkham, which is a mix of Salem and Providence (especially Brown University), it has several components.
Posted by ahtzib at 10:00 AM