Three Real World Versions of "The Colour Out of Space": Part 1 - The Red Rains of Kerala 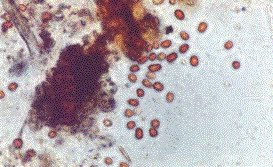 Of all his stories, H. P. Lovecraft considered "The Colour Out of Space" to be his best. Many critics agree that this tale, one of the subtler and more science fictional but still moody and atmospheric, is amongst his best. The story tells of a bizarre meteorite impact outside of Arkham, Massachusetts, and the subsequent ill effects on local residents exposed to the unknown substance or life form carried to earth from outer space.
The Miskatonic Museum specializes in pointing out parallels in real world scientific and historical occurrences between Lovecraft, his tales, and the Cthulhu Mythos he spawned. And "The Colour Out of Space" is one of the most fertile in this regard. Three examples come to mind.

The first does not directly involve the sighting or recovery of a meteorite. Nor does it involve any ill-effects to humans or livestock. But if a handful of researchers are correct, it is quite literally The Colour Out of Space. And it happens to be red. For two months in 2001, red rains fell over the state of Kerala in Southern India. This phenomenon has become known as the Red Rain of Kerala, and has become a sticking point in discussions of the hypothesis of panspermia. This concept holds that microscopic lifeforms could travel from world to world, being ejected from one planet, surviving vacuum in dormancy, and then possibly contaminating and prospering on a new planet. This would be similar to the claims, found elsewhere in the museum, of Martian fossils in a meteorite discovered in Antarctica. In the case of the Kerala red rains, a meteor would have exploded in the upper atmosphere, seeding the clouds with microbes from outer space. In addition to objections that debris from a meteorite would probably not continue to rain down for two months, rains of unusual color are not that uncommon, and can be produced by sandstorms, volcanic eruptions and other known natural phenomena. 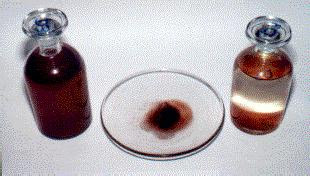 Kerala Red Rain samples. Image by V. Sasi Kumar (Wikicommons)
In the case of the Kerala rains, samples of water were taken and subjected to various forms of analysis. Some of the reports describe red-colored biological cells, in some reports without the DNA that would be found in earthly bacteria (though the accuracy of this point has been disputed). In a recent paper, these cells are reported to reproduce at high temperatures (131 degrees Centigrade and possibly up to 300 degrees Centigrade), but not at room temperature.

The paper concludes that the cells fluoresce in a spectrum similar to hydrocarbons detected in the Red Rectangle Nebula. Obviously such amazing claims have engendered substantial skepticism. The Wikipedia entry on the Red Rains details many of the criticisms, including the likelihood that prior heavy rains in the region caused excessive growth of the orange-colored lichen Trentepohlia, and that or perhaps a rust fungus was responsible (a local algal source has been suggested, though not determined, by one of the primary proponents of the general hypothesis of panspermia). (EDIT: You can read or listen more about this explanation in a recent post/podcast at Skeptoid) Institutional full disclosure would have us note that in the case of the Quabbin Reservoir impact, as noted in "The Colour Out of Space," Miskatonic professors were equally skeptical of the Gardner meteorite, with tragic results.

Tomorrow, part 2: The Horror at Carancas