Three Real World Versions of "The Colour Out of Space": Part 2 - The Horror at Carancas 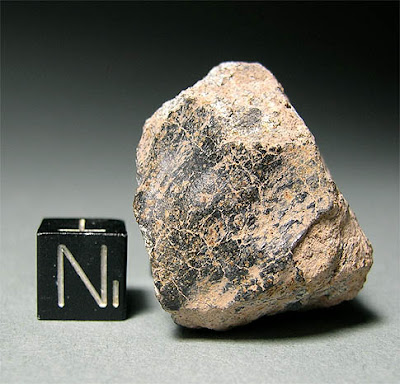 Exhibit Met002: Fragment of the Carancas Meteorite.
Image by Meteor Recon (Wikicommons).
On special loan in Miskatonic Museum's Nahum Gardner Memorial Meteorite Gallery.
Yesterday, we viewed sample from the Red Rain of Kerala. Samples of the water show apparently biological elements that are considered by many researchers to be perhaps a local algae. But a handful of scientists argue that the water contains unearthly cells that reproduce at high temperatures and may have a chemical signature tying them to a planetary nebula. These researchers suggest the rain may contain material from an exploded meteorite.

Today we look at the second of our three real world cases that bring to mind H. P. Lovecraft's "The Colour Out of Space." Considered one of Lovecraft's finest works, this short story describes how rural residents and farmers outside of Arkham, Massachusetts became sick after a bizarre meteorite struck on their land, with tragic consequences.

In 2007, a scenario very much like "The Colour Out of Space" played out in Peru and on the global media stage. On September 15 of that year, a meteor impacted in southern Peru, near the Bolivian border. A large crater, some reports describe it as 30 meters wide, was soon filled with boiling water, with some video and testimony suggesting additional impact damage to buildings and livestock. After the impact, fumes (including sulfur) were reported from the area of the impact, and soon several hundred people complained of headaches and vomiting, including several police officers sent to take samples of the meteorite.


In addition to the meteor explanation, initial skeptical reports wondered if the phenomenon were geological, while conspiracy theories suggested it might be an American spy satellite. Neither turned out to be correct as further study pointed not just to a meteor, but a chondritic rocky meteor (as opposed to a more typical iron meteor, information here). Geologists, including several from Brown University (the model for Miskatonic University, and located in Lovecraft's home of Providence), confirmed that a meteor struck, and that it did indeed create shockwaves and damage nearby structures with flying debris. They also found that the meteors (it had broken up during atmospheric entry) struck the earth at extremely high speed. Papers by those researchers, as well as more photos of the fragments and the site can be found here.

They did not, however, find anything to point to the meteor or any physical cause for the reports of illness after the strike. They instead suggested psychosomatic illness resulting from panic after the impact. A great deal of dust and soot would have been kicked up and inhaled by people and animals, but initial suggestions that arsenic in the soil had sickened villagers have not been supported by evidence for sufficient doses of the metalloid.

This time, unlike "The Colour Out of Space," the scientists did repeated and thorough investigation, rather than dismissing the stories of rural farmers out of hand. But the possibly extraterrestrial source of the subsequent illness remains without a definitive answer in both cases.

Tomorrow, we explore The Shadow Under Gypsumville!
Posted by ahtzib at 11:00 AM