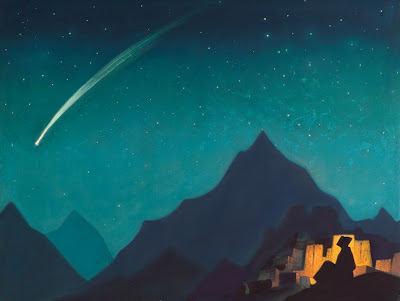 "Star of the Hero" Nicholas Roerich, 1932 (Wikicommons)
Over at his blog Mirage Men (the name of his recently released book Mirage Men: An Adventure into Paranoia, Espionage, Psychological Warfare, and UFOs

, arguing that much of the UFO cultural phenomenon has been deceptive government activity), Mark Pilkington discusses Nicholas Roerich's UFO sighting. In 1927, Roerich and his team saw "something big and shiny reflecting sun, like a huge oval moving at great speed" in the sky. The sighting, before there was the idea of flying saucers or UFOs, may be the result of a joint Chinese and Swedish research team launching (you guessed it) weather balloons. You can read the account on pages 361 - 362 of the book Altai-Himalaya (excuse the difficult navigation system at the link), published in 1929

Roerich was one of Lovecraft's inspirations for At the Mountains of Madness, and he and his paintings of temples amidst the Himalayas are name-checked in the novella as a visual cue for the city of the Elder Things. In turn, the Elder Things, through Maurice Doreal, worked their way into the earliest stew of flying saucers, and the idea of a massive and/or ancient secret city of civilization involving UFOs in Antarctica has never dissipated.
Posted by ahtzib at 6:27 PM