The Moche Octopoid Headdress - A Representation of Cthulhu? 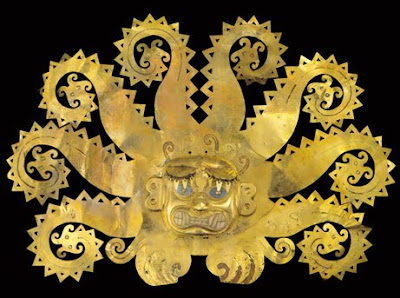 In 1988, looters robbed a rich tomb at La Mina in the Jequetepeque Valley of north coastal Peru. This tomb was left by members of the Moche archaeological culture, a series of sites and artifacts participating in shared material culture, and especially an expressive iconography and art style for most of the first millennium AD. Tomb looting is rampant in Andean archaeology as it is elsewhere, but this is exacerbated in the case of the Moche because of the excellent preservation (much of coastal Peru is quite dry, and organic materials are found at many sites) and because Moche metallurgists were skilled in working gold, a substance that drives the most primal dreams of treasure hunters.

In 2006, a gold Moche headdress was recovered in London, believed to derive from the La Mina tomb and looting. Police worked with an international art dealer to locate and take possession of the headdress, valued at possibly almost one million pounds (over 1.5 million $US). As of 2006, British authorities were working to return the object, described by some as the Moche Mona Lisa, to Peru.

The headdress has been described as a sea god or goddess, an octopoid creature with a human/feline mixed face. Most Moche depictions of octopods portray the suckers with lines of dots or circles. In this case the triangles on the tentacles are more like those attached in Moche painting to the frill of an iguana or along the sides of a snake, perhaps suggesting a scaly surface, thought they are also found on fish fins, such as in the depiction below. The ends of the tentacles suggest mouths, similar to serpents often found protruding from figures in Moche artwork.

Anthropomorphizing animals and objects was common in Moche art, as was combining elements of different creatures. Likewise, marine subjects were common in Moche art, dominating many scenes in the corpus of fine-line painted pots that make up the most important databank we have for elite Moche intellectual and religious concepts. Much of the background information here is found in Christopher Donnan and Donna McLelland's 1999 book Moche Fineline Painting: Its Evolution and Its Artists

. Intriguingly, a marine hybrid creature more commonly depicted than the octopus is one Donnan and McLelland label 'The Demon Fish." Resemblances to stories of mermaids or fish humanoids elsewhere in the Pacific or off the coast of Massachusetts are plain. 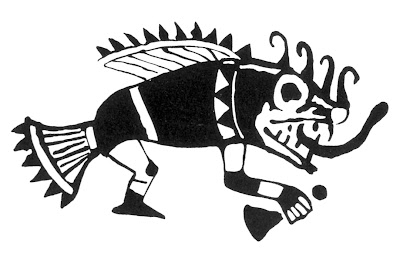 Demon Fish, from Donnan and McLelland 1999:
The Demon Fish is one of many anthropomorphized marine creatures, carrying a tumi metal knife for ritual combat, throat slitting, blood drinking and decapitation for trophy heads. This mythologized activity in Moche artwork is reflected in a number of archaeological discoveries. Probably the most infamous example is the Huaca de la Luna (a huaca is a general Andean term for prehispanic ritual sites) at the Moche type site, where multiple sacrifice or execution events left behind individuals in positions suggesting they were bound, and showing not just cut throats, but horrific wounds across the body. Bioanthropologist John Verano has suggested that the placement of cut marks on bones, when compared with other Moche artwork, suggests that some bodies were defleshed but not dismembered, and were hung in a fashion not unlike windchimes. Comparison can be made with Inspector Legrasse's early 20th century report on the Cthulhu Cult in Louisiana, and their hanging of bodies for some undescribed creature that the adherents told police would attend their ceremonies. Perhaps there is some parallel in the Decapitator, the name given to a supernatural figure that appears in Moche artwork associated with these rituals. This entity often had arachnid elements, as can be seen in the video below

What are we to make of this headdress? It is gold or a gold alloy, depicting a bizarre sea creature. Compare with Robert Olmstead's description of a tiara in the possession of the Newburyport Historical Society when he visited Massachusetts in 1927, as described in the narrative "The Shadow Over Innsmouth," by Howard P. Lovecraft

"It was tall in front, and with a very large and curiously irregular periphery, as if designed for a head of almost freakishly elliptical outline. The material seemed to be predominantly gold, though a weird lighter lustrousness hinted at some strange alloy with an equally beautiful and scarcely identifiable metal. Its condition was almost perfect, and one could have spent hours in studying the striking and puzzlingly untraditional designs - some simply geometrical, and some plainly marine - chased or moulded in high relief on its surface with a craftsmanship of incredible skill and grace."

That object was a prime example of Marsh Gold, a scattered series of eccentric jewelry pieces turning up in New England between the mid-19th century and the 1930s. The artist or workshop is unknown, but local folklore associates the pieces with the Marsh gold refinery in Innsmouth, Massachusetts, shuttered in 1927 after a federal investigation into alcohol bootlegging. Stories have swirled around the gold for decades suggesting it came from a pirate hoard found by Captain Obed Marsh during his trade expeditions in the 19th century Pacific. Prehispanic artifacts have been recovered from sunken Spanish ships, and such shipments were the prime target of pirates. If the Marsh Gold objects could be demonstrated as having ties to Andean art traditions, perhaps Marsh did indeed find some pirate loot left over from the days of the Spanish colonial empire in the Americas.

In light of the octopod-human-feline gold headdress, its similarities to the Marsh Gold, and prominent elements of supernatural anthropomorphic "Demon Fish" in Moche art, perhaps the geographical context should be examined. 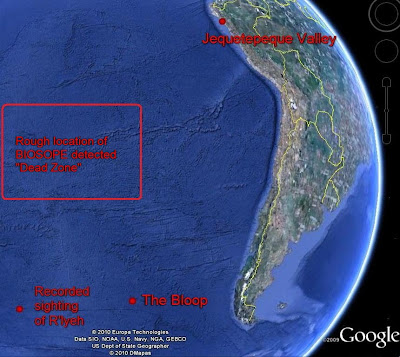 The above map displays several items of significant interest. The rough location where the headdress was believed to have been looted is noted on the South American mainland. To the southwest, we can see the rough location of the biologically emptiest spot in the ocean, waters exceedingly clear because they are more devoid of life than other areas of the open oceans, as discussed in a previous exhibit. South of this area we find the triangulated position of "The Bloop," an acoustic phenomenon to be discussed in a future exhibit, and the rough location of the mystery island, called R'lyeh by some, described in the Johansen Diary. These locations roughly outline the area suggested by theosophist James Churchward for the southeastern tip of sunken Mu, but as Lovecraft noted,

Theosophists have guessed at the awesome grandeur of the cosmic cycle wherein our world and human race form transient incidents. They have hinted at strange survival in terms which would freeze the blood if not masked by a bland optimism.


*note: while the information about the Moche is accurate, discussion of the Marsh Gold, Innsmouth, Inspector Legrasse and his investigations of the Cthulhu Cult are for edutainment purposes only
Posted by ahtzib at 7:58 PM