Cannibalism in earliest Britain - The Real "Rats in the Walls?" 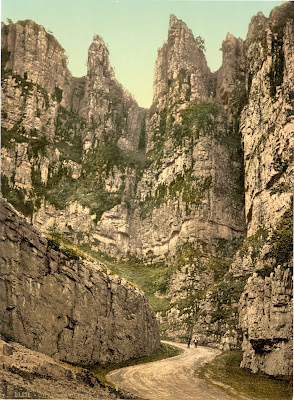 
Recent study of disparate bits of hitherto unrelated knowledge have suggested some deep roots for the repellent behavior of the Delapores of Exham Priory, as chronicled in H. P. Lovecraft's "The Rats in the Walls."

Anthropological testing of bones from Gough's Cave, in Cheddar Gorge, United Kingdom, have revealed some startling information about some of the earliest settlers of Britain after the glaciers started to recede. As reported in The Guardian, a battery of new tests and procedures suggest that immediately after a rapid warming in temperatures 14,700 years ago, Gough's Cave was inhabited by humans. The precision of dating the settlement derives from a new method for filtering carbon samples for radiometric dating, one primarily suited for bones as it isolates collagen.

Some of these humans were butchered intensively, stone tools used in a manner identical to the techniques used to butcher animals, and dumped in a pit. While the numbers are small and do not suggest a large-scale practice, and there is no evidence of violent death, the intensive processing methods are striking.

It should be noted that this processing is not a guarantee of cannibalism, as the evidence only speaks to the intensive removal of flesh and marrow in a manner equivalent to animals assumed to be used for food. 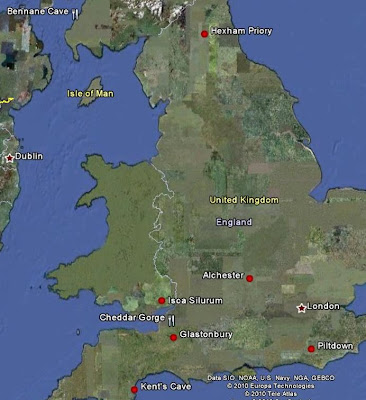 Map of sites mentioned in the text. In addition, three other locations are noted. S. T. Joshi (1997) suggests that Alchester may have inspired Anchester, the general area of Exham Priory, while Hexham Priory in the north may have inspired the name of the place itself. Piltdown is referenced in the story in relation to the hominid remains found under the Priory.

It is notable that Cheddar Gorge is not very far from some other points of interest in regards to "The Rats in the Walls." Roman history is part of the de la Poer heritage, and while he made an error in the number of the legion stationed there, Lovecraft was clearly inspired by the Roman camp at Isca Silurum in Wales, a site that fascinated him. In 1923, the year "Rats" was written, Lovecraft had read about the place and fantasized of it, as demonstrated in a letter in May of that year to Frank Belknap Long (HPL letter to Frank Belknap Long, May 13, 1923, Published in Lovecraft 1965: 228) (he would write of it in a similar manner in other letters through the years). The inspiration by Isca Silurum with the invocation of the Cymric (Welsh) language suggests that the general area near the Wales/England boundary isn't a bad place to place Exham Priory.

Just to the south of Cheddar Gorge, another interesting piece of the Exham Priory puzzle can be found at Glastonbury. Though I am not aware of any evidence that Lovecraft was familiar with it, in 1919 Frederick Bligh Bond published The Gate of Remembrance (intriguingly, the New York Times did not get around reviewing it until January 1923, the same year Lovecraft wrote "Rats")(New York Times, January 14, 1923). In it, Bond discusses his employment of a psychic researcher in his excavations of Glastonbury Abbey a decade prior, similar to the presence of Thornton, a psychic investigator, in Delapore's party of explorers under Exham Priory. This revelation led swiftly to Bond's dismissal from Glastonbury, though I suppose this is not as harsh a fate as the committal to a mental institute suffered by Thornton.

Returning to Gough's Cave, the descendants of these early settlers would have not survived directly to the present, in Britain at least. Climate grew colder again with the onset of the Younger Dryas, sending the North Atlantic back into a glaciation for about a thousand years, before warmer and more familiar temperatures became the norm after 11,500 years ago. Britain was settled again, and once again the spectre of cannibalism would raise its head. In 1866, a human arm bone was excavated at Kent's Cave, Devon, amongst thousands of animal bones. Re-analysis of this bone in 2009 (as reported by the BBC) showed cut marks not unlike those from Gough's Cave. That said, cannibalism is a flashy topic, and taking a look at some of the promotional material from the Cheddar Gorge museum might give us pause before jumping to conclusions.

Similar sensationalism has been invoked in historical discussion of another tale of British cannibalism, this one much more recent, the infamous case of Sawney Bean. Like the de la Poers in "The Rats in the Walls," the Bean clan supposedly lived in a cave (since the nineteenth century associated with Bennane Cave) and ate hundreds or thousands of victims, leaving behind a vast subterranean bone bed. In both cases, this reign of terror came to an end during the reign of King James I, a monarch so obsessed with witchcraft that he became personally involved in witch hunts and wrote Daemonologie, a manual for hunters. The reality of the Bean legend is not entirely clear, and it has been suggested it may have been nothing more than a print media hoax of the eighteenth century (read original text here) based on earlier tales.

includes relict (or time traveling) cave men and savages amongst the various terrors encountered or alleged during his journey up and down Britain in search of the strange. More than one reviewer has suggested (with a mix of praise and disdain) Redfern and his traveling companions resemble a punk version of Lovecraft's seekers of "strange horrors," and indeed the book plays with a mythology of (somewhat New Age-tinged) extradimensional old ones who can be found in forgotten places by those who disturb what should be left alone. Likewise, the tale of Sawney Bean appears to be a staple of the Edinburgh paranormal tourism industry (a development not approved by all).

Bond, Frederick Bligh (script by John Alleyne)
1921 The Gate of Remembrance: The Story of the Psychological Experiment which Resulted in the Discovery of the Edgar Chapel at Glastonbury. Fourth Edition. E. P. Dutton and Company, New York. Source Google Books.