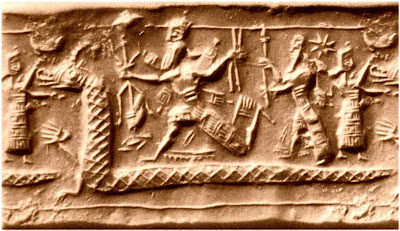 Professor Ellen Van Wolde of Radboud University has created a bit of a firestorm with her new analysis of Genesis, and the press hype it has gotten. An article in the Telegraph has caused all the fuss. In essence, Professor van Wolde is arguing that the Hebrew verb bara is better interpreted not as "to create" but in this context "to separate." Meaning that rather than the god of the Abrahamic traditions creating the earth and universe, a world already existed, and this god went about separating parts of it.

The element of interest here?

She concluded that God did not create, he separated: the Earth from the Heaven, the land from the sea, the sea monsters from the birds and the swarming at the ground.

"There was already water," she said.

"There were sea monsters. God did create some things, but not the Heaven and Earth. The usual idea of creating-out-of-nothing, creatio ex nihilo, is a big misunderstanding."

Preternatural sea monsters predating the gods of Man. Yes, I believe I've heard this story before.

More traditional scholars would point to similarities with other Near Eastern myths, like that in the Babylonian creation story, Enuma Elish. In this story, in a war of gods, Marduk defeats the sea monster Tiamat (as depicted in the Babylonian cylinder seal above), and uses the components of her body to create the earth. Such a similarity is not terribly surprising, given the famous similarities between the story of Noah's Ark in Genesis, and numerous Flood and Ark stories in the Near East.

Perhaps more surprising is the similarity to the story of the Mesoamerican Earth Monster. There are different versions, but amongst the Aztecs, ideas of this alternated between the sea monster/caiman Cipactli and the goddess Tlahtecutli (statue below), torn to bits by other gods and used to create the land, though like some other monsters in the sea, she is dead but alive, and likes to have blood sacrifices. 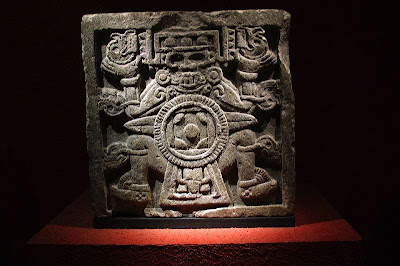 Suffice to say, the reactions to Professor van Wolde's thesis have not been warm (here, here, and here). But perhaps it is better that we not voyage far from our placid island of ignorance in the midst of black seas of infinity, even if some sky god wants to separate it for us.

UPDATE: These illustrations of traditional Hebrew monsters are very much on topic.
Posted by ahtzib at 10:16 PM