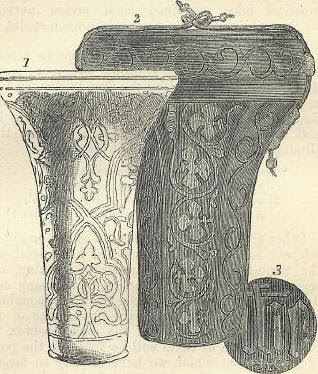 Much is made of H. P. Lovecraft's ardent materialist skepticism and atheism. It was a defining element for the man. Personally, one of the great "what if's" of Lovecraft's life, in my opinion, revolves around the debunking book on superstition that Lovecraft was writing for Harry Houdini, an item we will perhaps return to in the future. But while Lovecraft may have rejected the supernatural, it doesn't mean he couldn't have a bit of magical lore in his family background.

In March 1934, Lovecraft wrote a letter to one of his regular correspondents Robert Barlow, who would go on to be an anthropologist of Mesoamerica, specializing in rare Nahuatl texts and Aztec hieroglyphic writing. In this letter, Lovecraft discusses his genealogy, including ties to the Musgrave family. While Lovecraft regularly discussed his genealogy (including jokingly producing Roman and other ancestors to satisfy his historical interests), in this case he went into the specifics of an unusual item associated with the Musgrave family: The Luck of Eden Hall. As Lovecraft put it himself:

“This is the legend of Eden Hall in Cumberland, seat of the family until quite recent times. It is given erroneously in a German poem by Uhland and thence paraphrased in a verse of Longfellow’s – but the original version of the tale is as follows: A drinking-glass was stolen by a Musgrave from the fairies, who thereafter made futile attempts to recover it. In the end, the fairies pronounced the following prophecy – indicating that disaster would overtake the house of Musgrave unless the glass was kept intact:

In the family there actually existed an old glass, supposed to be the one of the legend, which was guarded with the most extreme care. Upon the breaking up of the estate and the sale of Eden Hall after the World War, this glass was placed in the South Kensington Museum, London. I hope no one will smash it, since that would doubtless bring me some sort of evil through my Musgrave side!”

More extensive versions of the story note that the cup was found by one or more humans, possibly by a servant, who disturbed a group of fairies partying near a well. As the fairies fled, one of them (in at least one version, the Queen of the Fairies) uttered the curse.

While not an actual magical fairie cup, the Luck of Eden Hall nonetheless has an impressive pedigree. In reality the cup is an ornate gilded and enameled drinking cup made in Syria in the thirteenth century. It seems to have left the Middle East not long after that date, as a custom case was made for it, likely in fourteenth-century France. While the manner in which it reached England is uncertain, returning participants in one of the later Crusades seems a possible option. It is not the only legend of a fairie cup, nor the only supposedly fairie item, ranging from elaborate luxury goods to "elfshot" interpretations for prehistoric projectile points.

It was clearly very carefully curated, only brought out of its case for special occasions, though there are family accounts of ancestors throwing it into the air as if to tempt fate. It can be traced back in the Musgrave family to at least a published mention of it in 1791.

While the Hall was demolished in 1934, the cup exists intact to this day in the Victoria & Albert Museum. The cup was loaned to the museum in 1926, and would later become a permanent part of the museum collection in 1956.

You can learn more about the Luck, as well as see recent color photographic images, at the Victoria & Albert Museum page on the Luck. A modern Musgrave discusses the legend here.