The Resurrected Lifeforms of Blood Falls 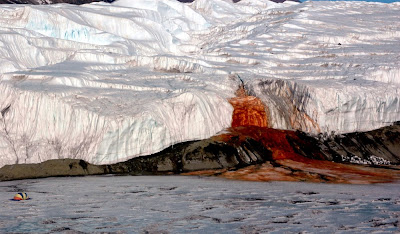 
First discovered in 1911 (the same year a Martian meteorite fell in Egypt with possible fossil evidence, as mentioned in the last post), Blood Falls gets its name from iron-rich deposits that produce a reddish runoff reminiscent of blood. 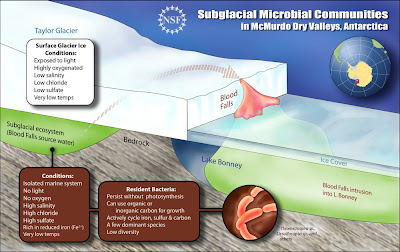 How Blood Falls work. Image by Zina Deretsky. Larger version here.
More intriguingly, recent research documents microbes and an ecosystem that were trapped in a saltwater lake two to four million years ago by the advance of Taylor Glacier, and then proceeded to adapt and produce a new ecosystem. Now, the sub-glacial water deposits are being released as the ice recedes. The microbes may utilize sulfur to process the iron oxide deposits and get small amounts of organic material in those deposits. This technique is extremely unusual. This unexpected ecosystem has serious ramifications for understanding possible extraterrestrial life in conditions on distant worlds we would find anathema to life.

You can hear more about it in an NPR review with scientist Jill Mikucki.

As with the potential alien fossils of ALH84001, we find parallels (in a similar vein the New York Times compares the case with science fiction) with the discoveries of the Miskatonic University Expedition Antarctica Expedition, as chronicled in At the Mountains of Madness

By this time the ultimate doom of the land city must have been recognized, for the sculptures showed many signs of the cold's malign encroachments. Vegetation was declining, and the terrible snows of the winter no longer melted completely even in midsummer. The saurian livestock were nearly all dead, and the mammals were standing it none too well. To keep on with the work of the upper world it had become necessary to adapt some of the amorphous and curiously cold-resistant Shoggoths to land life—a thing the Old Ones had formerly been reluctant to do. The great river was now lifeless, and the upper sea had lost most of its denizens except the seals and whales. All the birds had flown away, save only the great, grotesque penguins.

The specimens found by poor Lake did not enter into these guesses, for their geologic setting proved them to have lived at what must have been a very early date in the land city's history. .... They would have remembered an older scene, with lush Tertiary vegetation everywhere, a younger land city of flourishing arts around them, and a great river sweeping northward along the base of the mighty mountains toward a far-away tropic ocean.

The alien-like, iron-eating bacteria of Blood Falls were trapped under a glacier, sealed under the ice in lake hundreds of meters below the surface. But like the Elder Things retreating into the watery abyss, they adapted to the dark and to the cold. And like the excavated Elder Things at Lake's Camp, their resurrection and return to the surface stains the ice of Antarctica blood red, though not for quite the same reasons.

The mention of saurian livestock also brings to mind other, less subtle tales of prehistoric survival in Antarctica