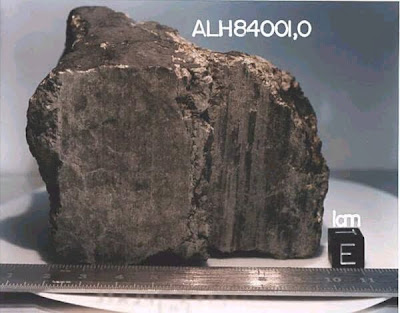 (image from NASA, accessed from ESA Science and Technology)

In 1931, Miskatonic University's Antarctica Expedition relayed news of a tremendous fossil discovery in an Antarctic cave. As described in novelized form in At the Mountains of Madness (ebook, various formats):

"Fowler makes discovery of highest importance in sandstone and limestone fragments from blasts. Several distinct triangular striated prints like those in Archaean slate, proving that source survived from over six hundred million years ago to Comanchian times without more than moderate morphological changes and decrease in average size. Comanchian prints apparently more primitive or decadent, if anything, than older ones. Emphasize importance of discovery in press. Will mean to biology what Einstein has meant to mathematics and physics. Joins up with my previous work and amplifies conclusions. Appears to indicate, as I suspected, that earth has seen whole cycle or cycles of organic life before known one that begins with Archaeozoic cells. Was evolved and specialized not later than a thousand million years ago, when planet was young and recently uninhabitable for any life forms or normal protoplasmic structure. Question arises when, where, and how development took place."

Disaster struck the expedition soon afterward killing much of the expedition staff and destroying most of their specimens. But since that time, the notion that fossil traces of bizarre and possibly alien life forms might be found in the polar regions has recurred in speculative tales and captured the popular imagination. Not long after At the Mountains of Madness, John Campbell published his story "Who Goes There?" In turn this tale was made into one of the first flying saucer movies of the 1950s, The Thing From Another World (on Google Video here) and a later acclaimed film version The Thing, a movie often referred to as the most Lovecraftian mainstream film yet made. These are but the tip of the iceberg, so to speak, as there have been many novels, films, television programs, and other stories about the discovery of ancient alien life or technology in the polar regions and especially Antarctica, as well as the similar concept of discovering lost civilizations or an entrance to the hollow earth. They are too numerous to list here, but fortunately others have taken on the task, including Professor Laura Kay's polar website with lists and descriptions of polar fiction (broken into several groupings, the genre fiction page of most interest to this topic); Dr. Elizabeth Leane's Representations of Antarctica: A Bibliography; and The Antarctic Circle, with Fauno Lancaster Cordes' "Tekeli-li"Bibliography of Antarctic Fiction.

So it is fitting that the first potential evidence for alien life taken seriously by the scientific community was discovered neither in a flying saucer in the skies, a radio broadcast from the stars (the Wow! signal aside), nor a robotic probe in the solar system, but by geological survey in Antarctica. About one-tenth of one percent of meteorites that have been discovered on Earth originated on the planet Mars, and only a handful of these were discovered in Antarctica (many have been recovered from North Africa). 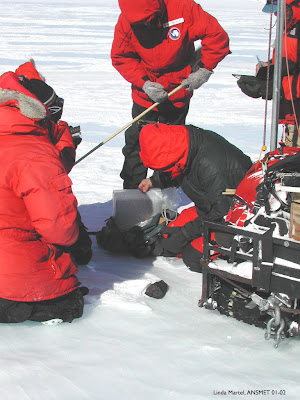 
And one of this handful, discovered in 1984, is the most famous meteorite ever discovered. Dubbed ALH84001 due to its discovery in the Allan Hills of Antarctica, the rock may have crystallized very early in the formation of the Solar System, about 4.5 billion years ago. After being ejected from a meteor impact on Mars 4 billion years ago, it may have rested on the planet until another impact launched it out of Mars' gravity and into space 15 million years ago, around the time Antarctica started to cool substantially and glaciers formed the polar ice cap. ALH84001 did not land in Antarctica until approximately 13,000 years ago, during the end of Earth's Pleistocene, when humans had settled most of the planet and were about to begin or were beginning plant domestication. The great megafauna of the ice ages were going extinct or were gone, but Earth was about to get one last climactic shock in the sudden return to Pleistocene conditions in the Younger Dryas for several centuries, before conditions started to resemble those of the current Holocene.

A decade after its discovery, research into ALH84001 would shock the world by suggesting chemical and fossil evidence for Martian bacteria. While the most compelling element has always been the creation and disposition of magnetite in a manner similar to that created by bacteria on Earth, the scanning electron microscopy images of these structures, possible fossils, grabbed the public attention. 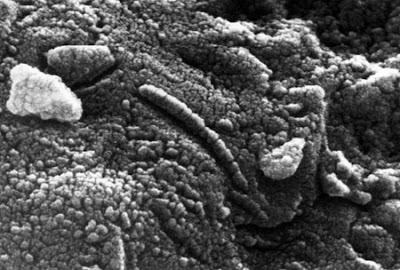 The purported Martian fossils in ALH84001. Image from NASA, via Wikicommons
A good detailed overview of the discovery and research, aimed at a popular audience, is Donald Goldsmith's The Hunt for Life on Mars

Since the 1996 announcement of these findings, other researchers have suggested terrestrial contamination and other non-biological explanations for the "fossils," the magnetite structures, and other chemical and physical elements of the claim that the rock is evidence of ancient life on Mars. For much of the last decade, this has left the claims surrounding ALH84001 somewhat up in the air, the life hypothesis neither specifically refuted nor substantially strengthened. Other Mars meteorites have been examined for similar evidence. One, which landed in Egypt in 1911, the same year Norwegian explorer Roald Amundsen led the first expedition to successfully reach the South Pole in Antarctica, and that Hiram Bingham rediscovered Machu Picchu in Peru (one of the inspirations for Lovecraft's Elder Thing City in At the Mountains of Madness) has also been suggested as evidence for Martian life.

In the last month, new research with higher resolution electron microscopy has again focused on the magnetite formations, arguing that they are the product of biology. This will undoubtedly not be the last word on ALH84001, nor on the search for past Martian life. But it adds grist to the mill of a century of stories of dreams and nightmares about just such a discovery. HPL himself would have approved, between his occasional hobby of geological rock collecting, and his belief in primitive Martian vegetation. He furthermore specifically believed that interplanetary travel would be impossible, but that we might learn more of such life if some of it traveled via meteorite (he wrote as much in a letter to Nils H. Frome on February 8, 1937, a month before Lovecraft died; the letter is published in H. P. Lovecraft: Uncollected Letters. Necronomicon Press, West Warwick, Rhode Island, pp. 39 - 43, published in 1986).

At least we can be glad that so far there have been no incidents involving ALH84001 like those regarding Professor Lake's examination of the alien fossils found by the Miskatonic University Antarctica Expedition.

UPDATE: NASA thinks that they'll know for certain by the end of this year.

"We do not yet believe that we have rigorously proven there is [or was ] life on Mars." says David S. McKay, chief of astrobiology at the NASA Johnson Space Center.

"But we do believe that we are very, very close to proving there is or has been life there," McKay tells Spaceflight Now.