The Heslington Brain - Victim of Ghatanothoa or Mi-Go Experiment? 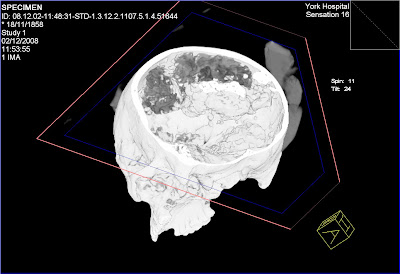 Brain material shows as dark folded matter at the top of the head in this computer-generated view into the skull. The lighter colours in the skull represent soil. Credit to the York Archaeological Trust (source)

In 2008 (press release), archaeologists working at Heslington, in Yorkshire, England, discovered something extraordinary: a preserved Iron Age human brain. Dating to the 7th or 6th century B.C.E. (673 and 482 B.C.E.), more or less, the brain was the only soft tissue to survive of the decapitated skull. Yes, the head of this individual, a young to middle-aged man, had been severed after he had been hanged, and then deposited in a pit at a residential and farming settlement.

Now, this case is being published and examined more fully, as described in this press summary. The most likely explanation for the preserved brain, which has shrunk a bit from its original size, is rapid deposition in an anoxic wet environment. This principle is also involved in the preservation of soft tissues in "bog bodies." However, other causes have not been ruled as to why the brain alone would be transformed and preserved.

Less orthodox suggestions come to mind. The Mi-go interest in human brains is obvious. But the Heslington Brain was found inside its skull, leaving this hypothesis problematic. Instead, the case of T'yog is perhaps the key. A priest and scholar of ancient Mu, T'yog's body was recovered from the floor of the South Pacific when a freak seismic event in 1878 caused a temporary geological uplifting. This discovery was correlated by certain mystics, with the story of T'yog in von Juntz's Unausprechenlichen Kulten, suggesting that the recovered artifacts and body were the ancient scholar who had met his grisly fate nearly 180,000 years ago (when mainstream science points to the emergence of modern humans in Africa). Tyog tried to defeat the horrifying entity known as Ghatanothoa, but through trickery was defeated, and his brain preserved (albeit in a better condition than that of the Heslington individual). An account of this discovery can be read as the short story "Out of the Aeons," by H. P. Lovecraft and Hazel Heald.

This of course begs the question: how would Ghatanothoa manage to effect humans in Iron Age England, across the globe from where it is trapped?

And why, as per the article linked above, did it happen again in the medieval era? Is it a cyclical phenomenon?
Posted by ahtzib at 4:21 PM

Labels: anthropology, archaeology, england, mu, out of the aeons