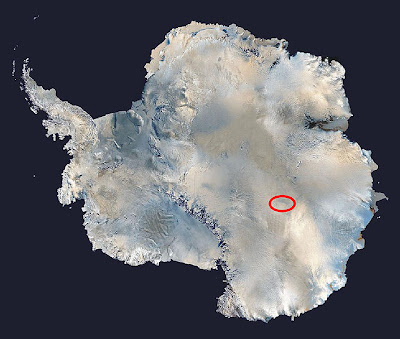 If you've been following recent reports, you may know that Russian scientists felt they were in a good position to finally break through into Lake Vostok under the Antarctic ice. Students of history familiar with Miskatonic's Antarctic expedition know full well the dangers of such an attempt.

But now comes word that the project has stalled for at least a year, and an intriguing footnote: they poured kerosene into the borehole to keep it from freezing over. Environmentalists and other observers question the wisdom of dumping a potentially toxic chemical over a pristine uncharted lake.

But if we read between the lines, a more horrible possibility emerges. I estimate that if the borehole was about a foot or so across, they pumped in about 500 liters of kerosene. Not enough to kill any particular eldritch monstrosity, especially spread over that distance.

But enough to free one? Is some monstrous plot afoot? What horrors are about to be unleashed in the name of science, or under the guise of science.

As HPL put it

"I am forced into speech because men of science have refused to follow my advice without knowing why. It is altogether against my will that I tell my reasons for opposing this contemplated invasion of the antarctic—with its vast fossil hunt and its wholesale boring and melting of the ancient ice caps."

"The most merciful thing in the world, I think, is the inability of the human mind to correlate all its contents. We live on a placid island of ignorance in the midst of black seas of infinity, and it was not meant that we should voyage far. The sciences, each straining in its own direction, have hitherto harmed us little; but some day the piecing together of dissociated knowledge will open up such terrifying vistas of reality, and of our frightful position therein, that we shall either go mad from the revelation or flee from the deadly light into the peace and safety of a new dark age."
Posted by ahtzib at 6:45 PM