The Gamburtsevs: The Real Mountains of Madness 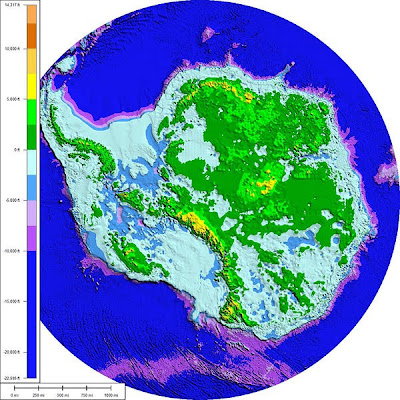 The Gamburtsevs Mountains, also known as the Ghost Mountains, are the last mountain range being mapped on Earth. They have eluded exploration for so long due to their location: under glacial ice in Antarctica. I am certainly not the first to note the comparisons that can be made with the Mountains of Madness (which have cast a shadow over Antarctic exploration), discovered by the Miskatonic University Expedition to Antarctica, and described in the novelized account of their exploits and discoveries, At the Mountains of Madness, as follows.

"10:05 P.M. On the wing. After snowstorm, have spied mountain range ahead higher than any hitherto seen. May equal Himalayas, allowing for height of plateau. Probable Latitude 76° 15', Longitude 113° 10' E. Reaches far as can see to right and left. Suspicion of two smoking cones. All peaks black and bare of snow. Gale blowing off them impedes navigation."

Those coordinates aren't too far off for the Gamburtsevs. First discovered by a Soviet expedition in 1958, The Gamburtsevs have recently been the subject of serious research. As with the Miskatonic Expedition’s experiences with the Mountains of Madness, airplanes have been the most vital tool for exploring these mysterious peaks. But rather than drill, these modern-day Professor Dyers are utilizing high-speed airborne laser mapping to reveal the form of the mountains. Dr. Michael Studinger, one of the directors of the AGAP project studying the mountains, discusses the mountains and the details of modern Antarctic exploration in this fascinating lecture video that certainly made me feel inadequate in terms of how tough my working conditions are, and what I’ve accomplished.

Their research is ongoing (here's a good index and intro for the AGAP project website), and while the maps are getting better, showing sharper peaks than had been expected, many mysteries (including why and when the mountains formed) are still being worked out. Earlier reports suggested both the origin and lack of erosion for the mountains was a big mystery, though some of this is addressed in the lecture above, utilizing newer data). Numerous recent research images from the project can be seen in this National Geographic slide show, while loads of field photos can be found here. The new research has also uncovered river erosion, suggesting that the mountains rose before Antarctica was shrouded in ice, and in fact this location may well be where glaciation started on Earth, and it may contain some of the world's oldest ice, over a million years old, invaluable for climate and other research. By this point, I shouldn't have to make any specific remarks regarding the dangers of digging up bizarre alien life forms in Antarctic ice.

EDIT: Dark Roasted Blend used the same title I did to refer to the Gamburtsev's. I've visited their site before, but I don't know if I read that particular article. But the similarity is unintentional, but sorry if it did bother anyone.

UPDATE: The history of the mountains has been pieced together, stretching back a billion years.
Posted by ahtzib at 9:50 PM