The Earthquake that Uplifted R'lyeh 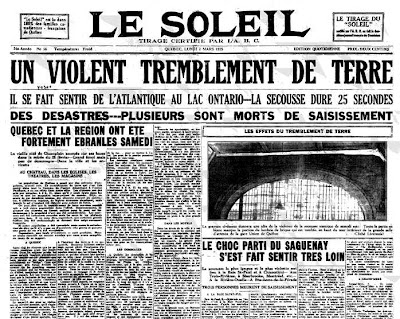 February 28, 1925 saw one of the strongest earthquakes in Canadian history. Dubbed the Charlevoix-Kamouraska earthquake (nice overview from Natural Resources Canada, source of the Le Soleil image above), it was centered in the St. Lawrence River Valley. 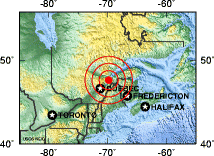 Wikicommons
Damage was not severe, but was nonetheless notable, and the event caused considerable unease in a region not accustomed to earthquakes. Images and description of some of the damage. 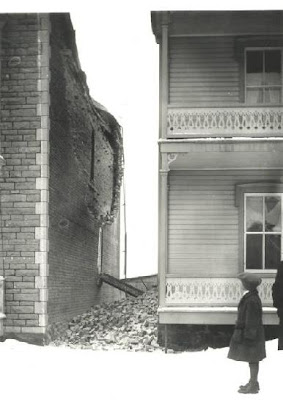 It caused minimal damage in Providence, less so in New York where Lovecraft was living at the time. This event was the inspiration for the South Pacific earthquake of the same date in "The Call of Cthulhu," which pushes the peaks of R'lyeh above the waters of the Pacific, allowing Cthulhu's dreams to menace sensitive human minds across the globe. Aftershocks of the Canadian quake in fact continued frequently throughout this period, largely ceasing on the day the crew of the Emma do battle with the cultists of the Alert, and one day before they land upon R'lyeh itself, and in turn the continent sinks back under the waves.

We can imagine Lovecraft, the amateur astronomer, reading about the quake later that year in the Journal of the Royal Astronomical Society of Canada. Now, this doesn't add up to having any effect on the other side of the planet, but it is the thought that counts.
Posted by ahtzib at 8:57 PM