Regnum Congo and the Horror of Theodor de Bry's Engravings Exhibit EXH002: Pigafetta's A Report of the Kingdom of Congo (1881 [1591]).
In collaboration with Miskatonic University's Orne Library, Special Collections

One of the most infamous books referenced in the works of H. P. Lovecraft is Regnum Congo, the centerpiece of "The Picture in the House." Lovecraft did not read this book, written in 1591 by Filippo Pigafetta, titled in English, A Report of the Kingdom of Congo, and the Surrounding Countries, Drawn Out of the Writings and Discourses of the Portuguese, Duarte Lopez. Instead, he read Thomas Huxley's Evidence as to Man's Place in Nature, a page from which is reproduced above. But we can read a copy of Pigafetta's work. In it he does describe the Anziques as being cannibals. He does not find this that unusual in a global scale, but Pigafetta holds the Anziques to be unique in that they willingly cannibalize members of their own community. From Chapter 5

They have shambles for human flesh, as we have of animals, even eating the enemies they have killed in battle, and selling their slaves if they can get a good price for them; if not, they give them to the butcher, who cuts them in pieces, and then sells them to be roasted or boiled. It is a remarkable fact in the history of this people, that any who are tired of life, or wish to prove themselves brave and courageous, esteem it great honour to expose themselves to death by an act which shall show their contempt for life. Thus they offer themselves for slaughter, and as the faithful vassals of princes, wishing to do them service, not only give themselves to be eaten, but their slaves also, when fattened, are killed and eaten. It is true many nations eat human flesh, as in the East Indies, Brazil, and elsewhere, but to devour the flesh of their own enemies, friends, subjects, and even relations, is a thing without example, except amongst the Anzichi tribes.

Today, the people referred to as Anziques are the BaTeke, living in the Republic of Congo, the Democratic Republic of Congo, and Gabon. They are part of the Bantu language family. And as is usually the case with cannibalism stories, they came to European chroniclers from unfriendly neighbors, making the veracity of such claims doubtful without additional evidence.

But this did not stop the reproduction of the stories, and especially the image for centuries. Engraver Theodor de Bry created the image which so impressed Huxley, and in turn inspired Lovecraft's tale of backwoods New England cannibalism. Illustrations by de Bry have become some of the most reproduced in portrayals of European exploration in the 16th century. He worked with reports from various travelers and chroniclers, such as John White (check out this section of Virtual Jamestown for comparisons, commentary, and more) but did not actually journey to Africa or the Americas himself. Nonetheless, his fascinating and at times disturbing imagery shows up again and again in both popular and scholarly presentations. His studies of the native of Virginia are very commonly used, and can be viewed at several online galleries, such as this one from the University of North Carolina Libraries.

Theodor de Bry also illustrated an edition of Bartolome de las Casas' A Brief Account of the Destruction of the Indies, an influential polemic against Spanish cruelties in the American colonies. These images are amongst the most horrifying de Bry ever produced, which is saying something, putting the centerpiece of "The Picture in the House" to shame. The book and the engravings were instrumental in establishing The Black Legend against the Spaniards, which portrayed them as monsters sacking the New World through mass torture and murder. There was indeed plenty of cruelty and destruction, but it is worth noting that the propagandistic emphasis on horrible Spanish excesses served political purposes in the national and religious wars of the 16th and 17th centuries, and even up through the Spanish Civil War to the present. The nations pointing out Spanish atrocities would have their own massacres and ethnic cleansing in colonies in North America.

I myself had an experience which calls to mind "The Picture in the House." Prior to my work with the archaeology of the Spanish Conquest, I was conducting prehistoric archaeological excavation in El Salvador. I had brought with me, amongst a handful of other books, a copy of Charles Hudson's Knights of Spain, Warriors of the Sun: Hernando de Soto and the South's Ancient Chiefdoms

, which featured some of the de Bry illustrations from las Casas. This engraving in particular horrified me. 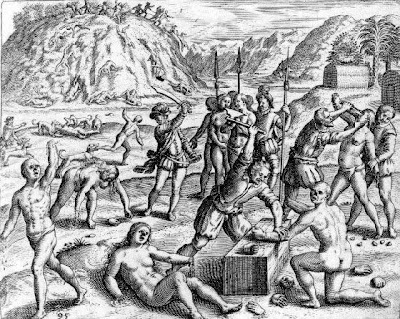 Cannibalism was also depicted, but for some reason the bits of people, and especially the anguished flailing of the maimed, bothered me at a core level. I knew that the taking of noses and ears was a common punishment for rebellion in feudal Europe, and that added to the reality of the horror depicted. For the remainder of my stay during that project, a period of several months, this image gnawed at me. I tried to avoid it while finishing the book, yet every so often felt compelled to seek it out, as if confronting the image would take away some of the fear that had gripped me. Only once out of El Salvador, and the claustrophobic apartment I lived in, and with many other books and other media, did the image's effect dissipate. Today it does not bother me in any undue fashion. But at the time, during a time period when there was great uncertainty in my life, and I felt somewhat trapped in situations not of my making both in a foreign land and in my larger life, de Bry's imagery chilled me to the core.
Posted by ahtzib at 5:08 PM